Europe Wants Georgia. But Not Georgians

May 22 Posted by Eric Livny in Education & Social Policy 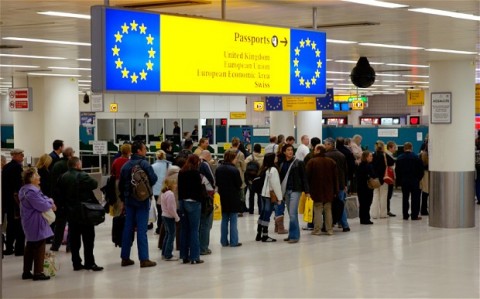 In March 2015, 31-year-old Tamar Trapaidze died of severe toxicity in Italy. Like many Georgian women of her generation, Tamar was an illegal immigrant employed as an in-home care worker by an Italian family. Being “illegal”, she must have feared deportation, which is probably why she was unable to receive adequate medical treatment.

Despite all the risks it entails, illegal immigration is a key survival strategy for many Georgian families. Since 2002, presumably the best period in Georgia’s recent history, the country has lost 14.7% of its population, mostly due to emigration. Remittances by Georgians abroad currently constitute 9% of the country’s GDP (as compared with only 2% in 2002). While Russia is still the largest source of remittances, the share of EU countries has been rising over time, reaching 30% in 2014 (mostly from Greece and Italy).

These facts are well-known. What is less well understood, however, is that visa-free travel and access to the EU labor market represents the main (and, perhaps, only) channel for an immediate tangible improvement in the lot of ordinary Georgian people as a result of the country’s European "association".

…access to the EU labor market represents the main (and, perhaps, only) channel for an immediate tangible improvement in the lot of ordinary Georgian people.

Just how vital free labor mobility is for EU’s eastward expansion (and Eastern Partnership) could be inferred from the angry reactions by politicians in Slovakia, Poland and Hungary to the suggestion by David Cameron that the UK may take a tough stance on migration when re-negotiating Britain’s EU membership terms. FT’s headline this week tells it all: “UK warned by east Europe not to meddle with migrant rights”.

Access to the EU labor market is particularly crucial for countries in the less industrialized Black Sea region such as Bulgaria and Romania. According to one estimate, facing meager employment opportunities at home, “3 million Bulgarians had left the country in the past 23 years and stayed away – a momentous demographic change for a country with a population now slightly above 7 million”.

The promise of visa-free short-term travel to Europe (which implies improved access to lucrative EU jobs, legal or illegal) is even more of a temptation further to the east, in Georgia, Ukraine, and other predominantly agrarian Eastern Partnership countries.

With the Georgian economy facing strong headwinds, Georgian politicians are not shy about the importance visa liberalization for the country’s future (and, by implication, their own political survival). In a rare moment of unity, Georgian President Giorgi Margvelashvili, PM Irakli Garibashvili and Parliament Chairman Davit Usupashvili have recently called on the EU to make an “unambiguous endorsement of the visa-free regime” at the Riga Summit. “For Georgians,” they write, “visa liberalisation will provide a long-awaited tangible reward and encourage renewed reform efforts.”

To fully appreciate the importance of visa liberalization for Georgia one has to understand that any other benefits potentially associated with the EU – agricultural subsidies, infrastructure investment and access to the EU market – will not materialize any time soon, or not at all.

The Deep and Comprehensive Free Trade Agreement (DCFTA), which Georgia and the EU signed last June, is a good case in point:

This brings us back to the point we have made earlier. If the EU wants to get serious about bringing Georgia, Ukraine and, perhaps, other Eastern Neighborhood countries into the European family of nations, it should reconsider its stance on the question of visa liberalization, and do so urgently.

Yet, the EU seems to be in no hurry.

TIME TO START THE ‘WHO LOST GEORGIA’ DEBATE?

On May 8th, European Commission issued the third report on the implementation of the Visa Liberalization Action Plan (VLAP). To cut the long story short, despite the Georgian government’s rush to tick off the boxes on labor and migration legislation, Georgia was not able to complete all the VLAP requirements. Georgian citizens will definitely have to wait at least another year to be able to travel to Europe visa-free.

Angela Merkel’s speech, delivered on May 21, ahead of the EU Eastern Partnership Summit in Riga, represents a clear attempt to manage expectations. “Visa-free travel rules for citizens of Georgia and Ukraine … will only be possible once all the requirements are met”, she said. “Eastern Partnership”, Merkel emphasized, “is not an instrument of EU enlargement policy”, adding that the EU should not trigger false expectations of its eastern partners in this regard.

As Davit Usupashvili put it, “the smaller the country, the smaller is its right to be disappointed”. Yet, while consistent with Eastern Partnership’s original purpose and mandate, Merkel’s statement will not be well-received in Georgia (and Ukraine). Right or wrong, disappointment is a function of expectation. And great expectations, as was the case in Georgia, will inevitably bring about great disappointment with the EU and Georgia’s general direction.

According to CRRC Georgian Barometer data, Georgian people’s trust towards the EU has been declining since 2008 (from 54% “fully trusting the EU” to only 33% in 2013). In parallel, a recent NDI poll (released on May 11) suggests that “although the majority of respondents remain in favor of Euro-Atlantic integration, support for joining the Russia-led Eurasian Union seems to be increasing. 31% of respondents said they “approve” if Georgia joins the Eurasian Union.” Importantly, the three most recent NDI surveys indicate an upward trend in support for the competing geopolitical project: from 11% in November 2013 to 20% in August 2014, to 31% in May 2015.

As discussed in a recent article by Sergi Kapanadze, Russia’s “soft power” has been on the rise since late 2012. Abashidze-Karasin discussions led to progress on many fronts. Russia simplified the process of issuing visas for Georgian citizens, and the Russian labor market opened for another wave of Georgian labor migration. The ban on Georgia’s imports was lifted by mid-2014, resulting in the resumption of wine and mineral water exports to the Russian market, and a very substantial increase in the price of grapes (a great boon for Georgian farmers). Tourism from Russia has been growing very fast in 2013 and 2014 thanks to regular flight connections established between Tbilisi and an increasing number of Russian cities. Russian investment, partnerships in the energy sector, and planned infrastructure projects are all indicators of Russia’s growing presence and attraction as an economic partner, according to Kapanadze.

EU’s failure to accommodate Ukraine and Georgia’s urgent desire for visa-free travel and, eventually, access to the EU labor market must be understood in the broader context of Europe’s migration crisis, the implications of which are discussed by Kenneth Rogoff in “Inequality, Immigration, and Hypocrisy”:

“Allowing freer flows of people across borders would equalize opportunities even faster than trade, but resistance is fierce. Anti-immigration political parties have made large inroads in countries like France and the United Kingdom, and are a major force in many other countries as well….

With most rich countries’ capacity and tolerance for immigration already limited, it is hard to see how a new equilibrium for global population distribution will be reached peacefully. Resentment against the advanced economies, which account for a vastly disproportionate share of global pollution and commodity consumption, could boil over.”